FCC Chairman is on a War Path

Federal Communications Commission Chairman Ajit Pai said during an interview that his family had been harassed since announcing a December vote to repeal Net Neutrality. So far the harassment has amounted to signs outside of his home that read “They will come to know the truth. Dad murdered democracy in cold blood, and for what?! It’s not too late for you, Chairman Pai. You don’t have to be evil!” A second sign reads “Is this really the world you want Annabelle and Alexander to inherit? How will they ever look you in the eye again?” Of course, Pai must use hyperbole when describing the protests “Internet regulation activists have crossed the line by threatening and harassing my family.”

Pai has yet to prove that anyone has threatened his family. 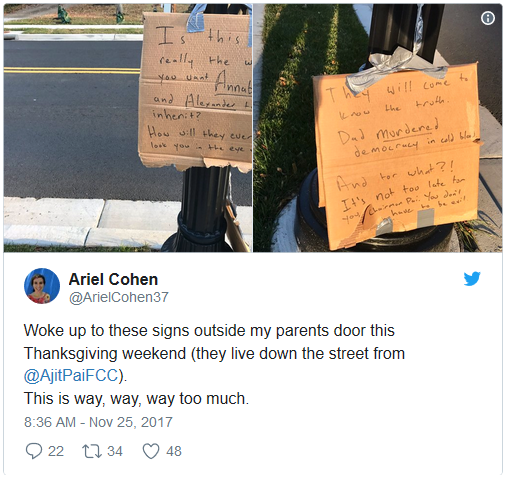 Pai has initiated a full assault on the Lifeline program that helps low-income families by providing discounts for internet and cell phone service so these families can stay connected and gain employment. Aside from family connectivity and employment opportunities the Internet is an education tool for children and adults. The plan is to reduce funding and limit which ISP’s can receive subsidies. In Pai’s proposal, the idea for a cap was presented for the program, but he never gives a cap value which gives him authority to set it to any value that he feels is fair.

Along with gutting the Lifeline program, Pai is trying to roll back Net Neutrality. Net Neutrality classifies Internet Service Providers under Title II. Ernesto Falcon provides a concise history of ISP’s with Title I and Title II classification. 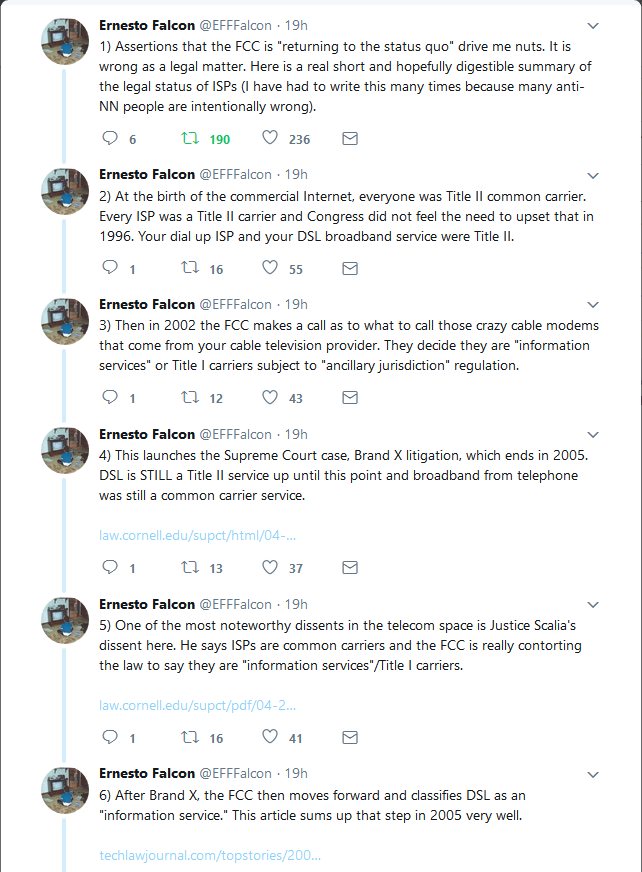 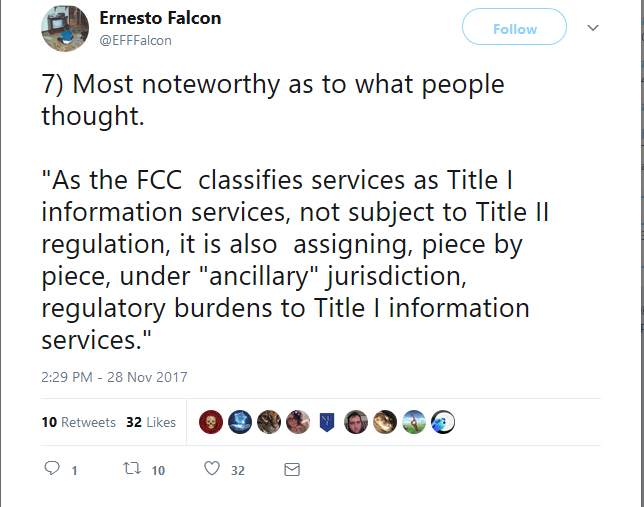 An explanation of the differences between Title I and Title II classifications is given by Fred Goodwin, he states that “Title I services are “Information Services” and are provided by “Information Services Providers,” like AOL, CompuServe, Delphi, etc. The providers and services are very lightly regulated, if at all. Title II services are “Telecommunications Services” and are provided by telephone companies (and recently, ISPs also). Telephone services are very heavily regulated. Although the FCC recently classified broadband as a Title II service, they (FCC) also elected to “forbear” from many of the more onerous requirements that are imposed on traditional telephone services. For example, ISPs don’t have to get FCC permission to raise the price they charge for broadband.  A telephone company (like AT&T, Verizon, CenturyLink, etc.), under the traditional rate of return regulation, would need FCC (or state PUC) permission to increase the price for a voice service.”

FCC Chairman Pai dares to complain that some protest signs outside of his home are over the line all the while he’s gutting programs and rolling back rules that help low-income families and the Internet as a whole in the US. Pai tries to marginalize what he is doing as “just policy” by saying “I understand that people are passionate about policy, but the one thing in America that should remain sacred is that families, wives, and kids, should remain out of it, and stop harassing us at our homes.”

It must be nice to be able to march into every home in the US and force people to use the Internet the way you think it should be used and even go as far as denying people modern avenues of communication.

The result of Net Neutrality being repealed is that you will have ISP’s charging a separate price for each type of service used on the Internet. For example, email could be priced at $20 a month, streaming services (video, music) could be $30 a month, web browsing could be $15 a month with all categories subject to data caps that you would be able to pay an extra fee to avoid. Without paying the fee to avoid data caps, you would be billed per gigabyte over your allotment which Comcast already does.

In all, the Internet could become more expensive to use a few services compared to now when you can use the entire Internet for a single price.

My Son’s Charitable Cause

Click here to donate to the National Pediatric Cancer Foundation

[to the tune of "because i got high"]

It's better to think of things as data paths rather than networks.

The truth shall set you free.

There is news coming out about me. I figured I would address it first and say that it is true.