Damore sues Google – The Verge gets it wrong

In case you haven’t heard, James Damore is suing Google for discrimination based on political beliefs for which he was fired. The legal complaint is lengthy, and I’ve read most of it. I say most of it because it contains constant harassment and discrimination claims by various people within Google.

The Verge is a reputable publication, but an article by Colin Lecher regurgitates the same historonics and hyperbole of the employees at Google that harassed and demeaned Mr. Damore. ” James Damore was fired as an engineer after the manifesto, which questioned the benefits of diversity programs and suggested women may be biologically inferior engineers, was widely passed around the company,” says Colin.

Mr. Damore’s memo was based on research published in the Journal of Personality and Social Psychology, Quillette, the British Journal of Guidance and Counseling, and The Atlantic. The only “leaning” publication in the group is The Atlantic that is admittedly left – way left. The other three sources are reputable science publications that are peer reviewed.

“People generally have good intentions, but we all have biases which are invisible to us. Thankfully, open and honest discussion with those who disagree can highlight our blind spots and help us grow, which is why I wrote this document. Google has several biases and honest discussion about these biases is being silenced by the dominant ideology. What follows is by no means the complete story, but it’s a perspective that desperately needs to be told at Google.”

“At Google, we talk so much about unconscious bias as it applies to race and gender, but we rarely discuss our moral biases. Political orientation is actually a result of deep moral preferences and thus biases. Considering that the overwhelming majority of the social sciences, media, and Google lean left, we should critically examine these prejudices:”

“Neither side is 100% correct and both viewpoints are necessary for a functioning society or, in this case, company. A company too far to the right may be slow to react, overly hierarchical, and untrusting of others. In contrast, a company too far to the left will constantly be changing (deprecating much loved services), over diversify its interests (ignoring or being ashamed of its core business), and overly trust its employees and competitors.”

You can see where he is coming from and going by the first few paragraphs. He has nothing to hide and doesn’t say anything “aggressive,” discriminatory or harassing. Mr. Damore went a step further and posted his memo on internal discussion boards to get feedback from conservatives and progressives alike.

The following are excerpts from Mr. Damore’s legal complaint with evidence taken directly from the internal forums at Google.

“In or about June 2017, Damore attended a “Diversity and Inclusion Summit” (“Summit”) conducted by Google at the Mountain View campus. Approximately 100 employees attended this event. Damore felt pressured to attend the event because Google proclaims “commitment to diversity and inclusion” to be an important factor in deciding promotion to leadership positions. Due to his excellent work performance, Damore was on the path to a leadership position at Google  before his abrupt termination.”

“The Summit was organized by Google’s senior vice presidents and other members of Google’s leadership team, including Balogh and Ramaswamy. Employees were allowed to ask questions, and there were also breakout groups for subsequent conversations.”

“The Summit covered general topics such as how Google could increase its diversity. Specifically, the Google presenters went through some of their policies that were designed to accomplish this such as treating preferred categories of people (women, certain but not all ethnic minority groups) differently during the hiring process by providing extra interviews, and putting applicants into a more welcoming environment based on their race or gender. The Google presenters also discussed putting “diverse” individuals into high priority queues so that they were more likely to  be hired, and hired faster.”

“Google defined “diverse” individuals as women or individuals who were not Caucasian or Asian.”

“On August 4, 2017, Damore attended a meeting with Rao and another representative from Google HR. At the meeting, Rao stated that Google was aware of Damore’s memo, and although Google could not ask him to take it down because it was protected political speech, they still thought it was in his best interest to do so. Damore understood from this meeting that Google was threatening him with termination for his internal speech about workplace issues, including his critique on Google’s gender and race quota programs and its dismissal of unpopular (conservative) political viewpoints.“

“On August 3, 2017 George Sadlier (“Sadlier”), a Director at Google, sent out a mass email condemning James’ essay as “repulsive and intellectually dishonest” and promising an HR investigation into Damore. Sadlier also promoted posts that advocated for physical violence against Damore. Subsequently, On Friday, August 4, 2017, Damore received a late-night email from Alex Hidalgo, a Site Reliability Engineer at Google in Sadlier’s organization, which stated, “You’re a misogynist and a terrible person. I will keep hounding you until one of us is fired. Fuck you.”

“Google executives and employees condemned Damore, his memo, and his views. Some coworkers demanded Damore’s termination, and the termination of other individuals who shared his views.” 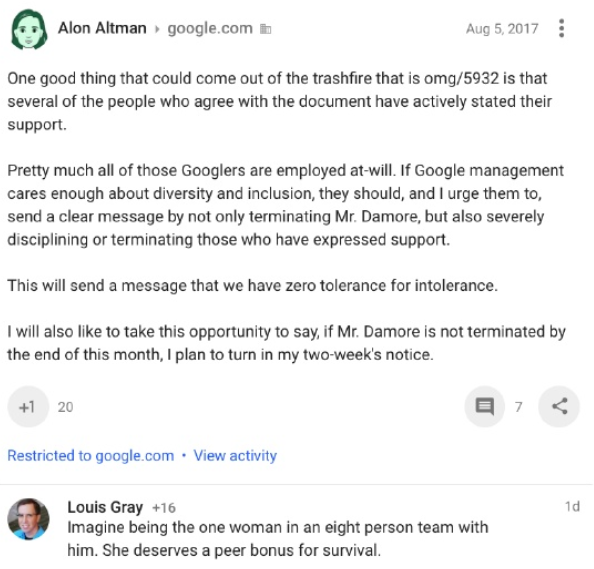 It only gets worse.

“In October of 2016, a Site Reliability Manager at Google became aware that a Google employee was a supporter of President Trump, and held socially conservative views. These two individuals did not work together, but had become acquainted through the company’s social mailing lists.”

“At a group lunch where the manager was present, the Google employee expressed concerns about Google’s intolerance of political minorities, such as conservatives. He stated that employees whose politics closely aligned with the senior management’s views were receiving favorable treatment, while political dissidents were unfairly denied promotions. SL became enraged when he heard this, and stormed off.“

“The manager falsely accused the Google employee of participating in an illegal “doxxing” campaign to publish an individual’s personal information on the internet for the purpose of harassment. SL also suggested that the Google employee was involved in illegal workplace discrimination, which was absolutely false and unsupported.“ 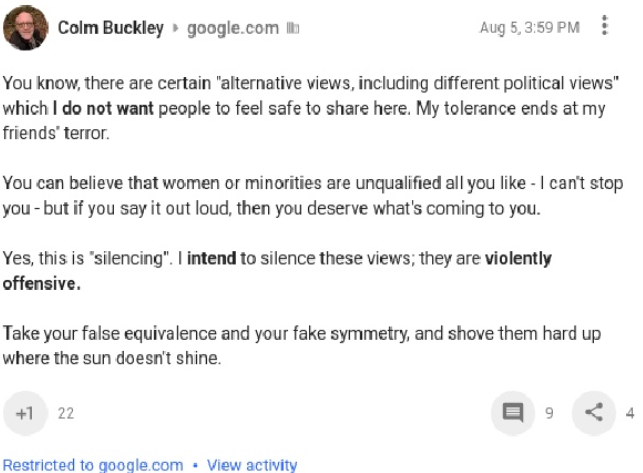 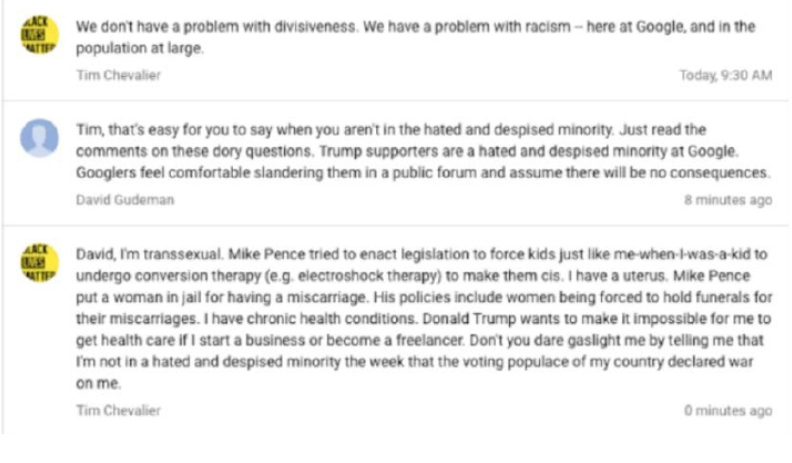 The image above is rife with misinformation. From the New York Times quoted Pence as saying “Congress should support the reauthorization of the Ryan White Care Act only after completion of an audit to ensure that federal dollars were no longer being given to organizations that celebrate and encourage the types of behaviors that facilitate the spreading of the HIV virus. Resources should be directed toward those institutions which provide assistance to those seeking to change their sexual behavior.”

The claim that Mr. Pence put a woman in jail for a self-induced abortion is equally absurd. A law was passed in 2009 that addressed feticide where a person that shoots a woman and her baby dies can be charged with murder. The feticide law was never meant to be applied to a pregnant woman. It’s not Mr. Pence’s fault that prosecutors wrongfully applied the law.

There isn’t a single reference for inference to electroshock therapy or any conversion therapy.

I don’t know Colin Lecher personally, but I have seen several of his other articles and there isn’t any material that is overtly political when it comes to gender differences or anything thing else related to Mr. Damore’s memo. Colin has mostly covered the Net Neutrality repeal, face-scanners, Apple issue’s, and NSA spying powers.

Based on Mr. Lecher’s other work I assume his article on Mr. Damore’s lawsuit and memo is born out of a lack of research and digesting other narratives and putting them into his own words.

“James Damore was fired as an engineer after the manifesto, which questioned the benefits of diversity programs and suggested women may be biologically inferior engineers, was widely passed around the company,” says Colin. This narrative is what was pushed by left-leaning publications such as Huffington Post and Salon with latter being the vilest of any left-leaning publication.

Colin adds, “The lawsuit contains dozens of pages of internal Google communications that, according to the suit, demonstrate anti-conservative sentiment at the company, although that characterization seems debatable in several of the cited examples.” The examples he’s talking about need context and are vague, but are by people in other examples exhibiting discriminatory behavior.

My opinion is that this kind of journalism hurts journalism more than it helps, but I certainly don’t think Colin is a shill that is purposely pushing a false narrative.